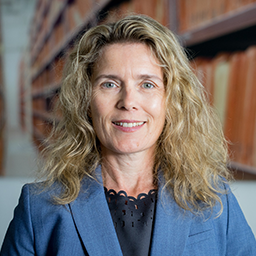 Head of Communication and Research

Dagmar Hovestädt is a communication professional applying her journalism background to the power of archives. She started her career in public television in Berlin where she covered stories on the development and conflicts of German unification. In 2000, she relocated to California to work for German TV as a foreign correspondent, covering current affairs, technology and political developments in the U.S. In 2011 she returned to Berlin to take up her post as spokeswoman of the Federal Commissioner for the Stasi Records (BStU). One of her passions became connecting the Stasi Records Archive experience internationally in the context of human rights archives. In June 2021 BStU was integrated into the Federal Archives, which led to her current post. Hovestädt studied communications, political science, and film in Mainz, Boulder, CO, and Berlin, completing with a master’s degree from the Freie Universität Berlin.