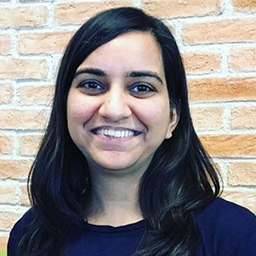 Kriti Sharma is an Artificial Intelligence expert and a leading global voice on ethical technology and its impact on society. In addition to advising global businesses on AI, she focuses on AI for Social Good.

Kriti has experience managing global Machine Learning and Digital products in regulated industries and has been leading chatbot projects for various social causes, from productivity to inequality to domestic abuse, in over 25 countries.

Included in the Forbes 30 Under 30 for advancements in AI and the Recode 100 List of Key Influencers in Technology in 2017, Kriti was also invited as a Civic Leader to the Obama Foundation Summit for her work in ethical technology. She is a Google Anita

Borg Scholar and recently gave expert testimony on AI Policy to the UK Parliament in the House of Lords.

Prior to founding AI for Good, Kriti was the VP of Artificial Intelligence at FTSE 100 companies including Barclays and Sage. Kriti was also appointed a United Nations Young Leader at the General Assembly in 2018 and is an adviser to the UN Technology Innovation Labs.

While much of Silicon Valley worry about doomsday scenarios where AI will take over human civilization, Kriti Sharma has a different kind of concern: What happens if disadvantaged groups don’t have a say in the technology we’re creating?